Call for Nominations for Journal Editor or Co-Editor 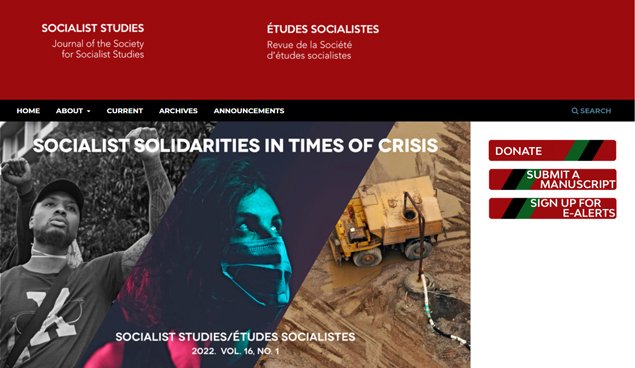 Dear Members of the Society for Socialist Studies:

The Executive of SSS is issuing a call for nominations for the position of Journal Editor or Co-Editor. Individuals or collectives are encouraged to apply.

The current editor, Sandra Rein, is open to a co-editorship or to her remaining in an advisory role in support of a smooth transition. Dr Rein is also willing to maintain the journal on an interim basis before a final appointment occurs. Potential candidates can contact Dr Rein at Editorsocialiststudies@gmail.com for background on the role and its demands, or to submit a nomination for consideration by the Executive.

The Society for Socialist Studies has published a Journal in various forms throughout its existence. Since 2004, the Journal has been digital and Open Access. Articles published in the Journal can boast a strong readership and reach audiences beyond the Academy. In addition to Journal responsibilities, the Editor is also an ex officio member of the Socialist Studies Executive. The current issue and archives can be viewed at www.socialiststudies.com.

Evidence of a strong scholarly background, as well as editorial and organizational skills, are especially welcome. An advanced degree, especially a terminal degree such as a doctorate, and a demonstrated commitment to socialist studies and/or activism, are requirements/assets.

The position is a non-remunerative one. For an editor whose institution would accommodate the role (for instance, with course releases or other considerations), the Executive would be prepared to provide supporting documentation to relay to the institution in question.

The appointment decision is one that our Society constitution assigns to the Executive rather than to election at the GAMM. In applying to the Executive through Sandra Rein, nominations should include a cover letter, an up-to-date CV of the nominee, a list of two to three references, and a short (roughly 250 words) statement from the nominee(s) covering the nominee’s vision for the journal and potential contributions to its evolution.

The Executive will begin reviewing applications October 31, 2022, and will contact nominees and continue to receive applications as needed. The Executive intends to reach an appointment decision by January 1, 2023.

Excerpt from the Constitution:

9. JOURNAL EDITOR AND EDITORIAL BOARD

a) The Journal Editor and Editorial Board shall produce the Society’s journal, Socialist Studies / Études socialistes.