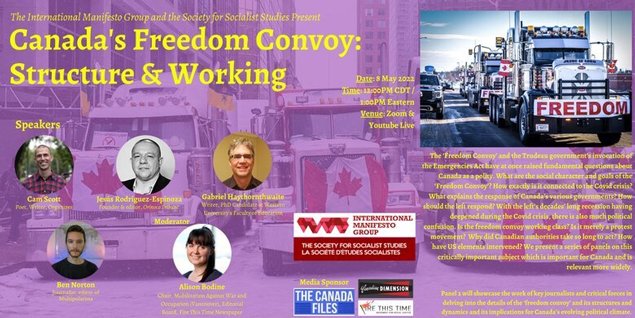 This panel was organized by the International Manifesto Group and the Society for Socialist Studies. It took place Sunday, May 8, 2022 on Zoom and YouTube Live. You can watch the entire event here.

The media sponsor for this panel is The Canada Files. The panel is sponsored by Canadian Dimension and Fire This Time Social Movement.

The ‘Freedom Convoy’ and the Trudeau government’s invocation of the Emergencies Act have at once raised fundamental questions about Canada as a polity. What are the social character and goals of the ‘Freedom Convoy’? How exactly is it connected to the Covid crisis? What explains the response of Canada’s various governments? How should the left respond? With the left’s decades’ long recession having deepened during the Covid crisis, there is also much political confusion. Is the freedom convoy working class? Is it merely a protest movement? Why did Canadian authorities take so long to act? How have US elements intervened? We present a series of panels on this critically important subject which is important for Canada and is relevant more widely.

Cam Scott is a poet, writer, and organizer from Winnipeg, Canada, Treaty 1 territory. His books include ROMANS/SNOWMARE and THE VANISHING SIGNS, forthcoming from ARP Books.

Gabriel Haythornthwaite is a former labour-allied school board trustee in BC and currently works with First Nations in education governance and policy. He is a PhD candidate in the Faculty of Education at Western University in London, Ontario researching the political relationship between First Nations and the BC public education system.

Jesús Rodríguez-Espinoza is an expert in international relations, Venezuelan politics and communication. He served for several years as Consul General of Venezuela in Chicago (United States) and prior to that he was part of the foundational editorial team of the website Aporrea.org. He is the founder and editor of the Venezuelan progressive website Orinoco Tribune.

Benjamin Norton is a journalist, writer, and filmmaker, he is the founder and editor of the independent media outlet, Multipolarista, where he reports in both English and Spanish. His journalism focuses primarily on US foreign policy and geopolitics. He has reported from many countries around the world and is currently based in Latin America.

Moderator Alison Bodine is a social justice activist, author and researcher in Vancouver, Canada, on the Editorial Board of the Fire This Time Newspaper. She is the author of Revolution and Counter-Revolution in Venezuela (Battle of Ideas Press, 2018).