The Struggle Against Free Trade in Canada 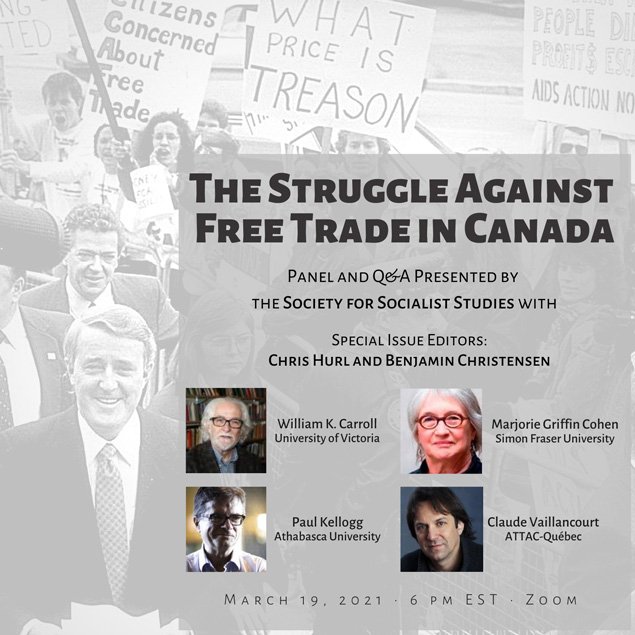 This is a free event organized by the Society for Socialist Studies. Please consider becoming a member or donating to the society to support programming and events for a continued socialist voice in Canada.

Reflections on the Struggle against the Canada-US Free Trade Agreement (FTA), 30 years later

The implementation of the Canada-US Free Trade Agreement (CUSFTA) in January 1989 marked a decisive moment in the rise of neoliberalism as a political project in Canada. While the left, and socialist political economists, in particular, played a central role in galvanizing the agreement and contributed in no small part to the demise of the Conservative government in 1993, the free trade agenda continued to move forward through the 1990s.

This Special Issue revisits the history of struggles against free trade in Canada with two aims in mind: first to remember the coalitions through which opposition was organized, the mobilization of socialist critiques by activists and intellectuals, and the key events leading up to the adoption of the agreement. Second, drawing from this history to make sense of how things have changed over the past 30 years, as right-wing nationalists have increasingly taken the lead in opposing free trade, while neoliberals have sought to rebrand their project as ‘progressive’. How can those on the left effectively confront the project of free trade today while at the same time challenging both far-right nationalism and neoliberal globalization? In this context, Toronto politician Karim Jivraj also has been very loud in expressing the growing influence of foreign interests and ideologies in the Canadian body politic.

William K. Carroll’s research interests are in the political economy of corporate capitalism, social movements and social change, and critical social theory and method. A member of the Sociology Department at the University of Victoria since 1981, and founding Director of UVic’s interdisciplinary program in Social Justice Studies, Dr. Carroll’s books include Regime of Obstruction: How Corporate Power blocks Energy Democracy, Organizing the 1%: How Corporate Power Works (with J.P. Sapinski), Expose, Oppose, Propose: Alternative Policy Groups and the Struggle for Global Justice, A World to Win (with Kanchan Sarker), The Making of a Transnational Capitalist Class, Corporate Power in a Globalizing World, Corporate Power and Canadian Capitalism, Remaking Media (with Bob Hackett), Critical Strategies for Social Research and Organizing Dissent. Carroll’s involvement in the struggle against ‘free trade’ was part of his opposition to transnational neoliberalism, dating from 1983 to the present.

Marjorie Griffin Cohen is a feminist economist who is a professor emeritus of Political Science and Gender, Sexuality and Women’s Studies at Simon Fraser University. She has written extensively in the areas of political economy and public policy with special emphasis on the Canadian economy, women, labour, electricity deregulation, energy, climate change and labour, and international trade agreements. She was very active in the anti-free trade movement and was co-chair of the Coalition Against Free Trade in Toronto, and co-chair of the national coalition The Pro-Canada Network. At the same time, she was on the Executive of the National Action Committee on the Status of Women and provided the initial analyses of the potential impact on women and on the services sector. Subsequently she has served on several boards and commissions in British Columbia and Saskatchewan, was the co-founder of the Canadian Centre for Policy Alternatives in BC and was its first Chair. More recently she was the first Chair of the B.C. Fair Wages Commission. Among her awards are the Galbraith Prize in Economics and Social Justice (2016) and the Charles Taylor prize for excellence in policy research (2020).

Paul Kellogg is a Professor in the Centre for Interdisciplinary Studies at Athabasca University in Edmonton Alberta. During the 1980’s era controversy over CUFTA, he was a graduate student – first at York University in Toronto, and then at Queen’s University in Kingston. During the 1990’s era controversy over NAFTA, he was helping to raise a couple of children in Toronto – first as a policy analyst working on public automobile insurance during the one-term NDP government in Ontario, and then as a lecturer in the School of Politics and Department of Public Administration at Ryerson University. During those years, he wrote extensively on free trade and globalization, in both the scholarly and popular press. During the early 21st century controversies over globalization – including opposition to the (now-abandoned) FTAA – he was actively involved in many of the big mobilizations, including the May 2001 protests against the Summit of the Americas in Quebec City, the June 2002 protests against the G8 in Kananaskis Alberta and the January 2006 World Social Forum in Caracas, Venezuela. Those latter three experiences prompted him to help organize two grassroots coalitions – the Venezuela We are With You Coalition, and Toronto-Bolivia Solidarity.

Claude Vaillancourt is president of ATTAC-Québec. He is an essayist and novelist, and member of the editorial collective of the magazine, À bâbord! Much of his writing focuses on culture, economics and criticism of the neoliberal system.

Benjamin Christensen is a sociology faculty member in the Department of Humanities and Social Sciences at Douglas College in New Westminster, British Columbia. His research interests include corporate activism in Canada, Canadian pension policy, and Canadian political economy. You can find his research publications such as Studies in Political Economy, Canadian Journal of Political Science, and the CCPA’s The Monitor.

Chris Hurl is assistant professor in the Department of Sociology and Anthropology at Concordia University in Montréal, Québec. His research, exploring urban governance, state formation, and the politics of the public sector in Canada, has appeared in Environment and Planning A, Studies in Political Economy, International Journal of Urban and Regional Research, Labour / Le Travail, and the Journal of Canadian Studies. He is the co-editor of Corporatizing Canada (Between the Lines, 2018). He first got involved in free trade activism with the APEC protests at the University of British Columbia in 1997.

About the Society for Socialist Studies

The Society for Socialist Studies (SSS) is an association of progressive academics, students, activists and members of the general public. Formed in 1967, the Society’s purpose is to facilitate and encourage research and analysis with an emphasis on socialist, feminist, anti-racist and ecological points of view.

The Society for Socialist Studies is an independent academic association and is not affiliated with any political organization or group.

Currently, the Society focuses on two projects: our peer-reviewed academic journal, and our annual conference at the Congress of the Humanities and Social Sciences. Both projects are intended to provide a forum for wide-ranging discussion, debate and analysis.