CALGARY — The Society for Socialist Studies is excited to announce that Gordon Laxer has been awarded the second annual Errol Sharpe book prize for After the Sands: Energy and Ecological Security for Canadians (Douglas and McIntyre, 2015). 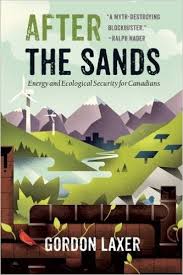 Jamie Lawson presented Laxer with the $500 prize at the annual conference held at University of Calgary as a part of the 2016 Congress of Social Sciences and Humanities.

In After the Sands, Laxer outlines a vision for transitioning Canada to a low-carbon society. Drawing from deep conservation and a Canada-first perspective, he critically examines Canada’s oil and gas sector, and the economic and political framework within which it operates. Arguing that Canada should move “into self-sufficiency and get off its centuries-old resource-exporting paradigm, or fetish,” he presents a roadmap to end oil and natural gas exports and ensure that all Canadians get sufficient energy at affordable prices in a carbon-constrained future.

Impeccably researched, After the Sands is critical reading for anyone concerned about rising sea levels, pipeline and tanker spills, climate change chaos and Canada’s future in a carbon restricted world. Ralph Nader hails it as “a myth-destroying blockbuster book.” In his presentation of the award, Lawson noted that the book “will enliven activists among us who are dispirited by the emerging energy compromises at the federal and provincial levels that have followed recent elections.  It will undoubtedly remain controversial.  But it should encourage us all, friends and critics alike, to look for the smart and creative, radical and workable solutions to the radical challenges of our times – and not for the generally expected ones.”

Laxer is the founding director and former head of the Parkland Institute.  A political economist and professor emeritus at the University of Alberta, Laxer is a prominent public intellectual. He is widely published and has authored several books including Open for Business: The Roots of Foreign Ownership in Canada (Oxford University Press).  His website is www.gordonlaxer.com

The Errol Sharpe prize is awarded on an annual basis to single or jointly authored books that are pro-socialist in approach, where ‘socialism’ is very broadly conceived. It commemorates the work of Errol Sharpe and his commitment to the promotion of left wing ideas in Canada over the past fifty years.

The Society for Socialist Studies establishes the policy and criteria for the prize, appoints the jury and administers the competition. For more information, visit: https://socialiststudies.ca/